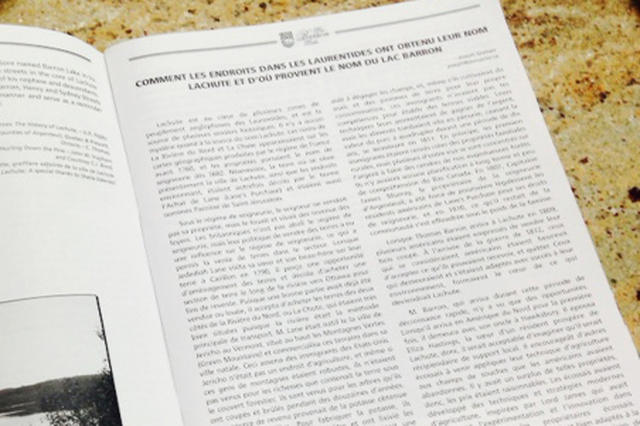 Lachute is at the centre of the early English-speaking settlements of the Laurentians, and many historic trails lead back to it. There is no mystery as to where its name came from, though.  Both La Riviere du Nord and La Chute appeared on maps made during the French regime, prior to 1760 and the property was designated as a seigneury as early as 1682.  All the same, the land where the town is today and some of its surrounding area was once described as Lane's Purchase, and was first officially called the Parish of St-Jerusalem.

Under the seigneurial system, the Seigneur did not sell his property, but simply rented it, and then lived on the rental income.  While the British did not abolish the seigneurial system, their policy of selling the land did influence the management of the seigneuries, and sometimes parcels were sold.  When Jedediah Lane visited his sister and brother-in-law on their property at Carillon in the 1790's, he saw a development opportunity, and decided to buy a stretch of the Ottawa riverfront for resale.  So much of it had already been sold or leased, though, that he finally settled for a large parcel on either side of the North River around the falls, or La Chute, ideally located because rivers were the only corridors of transportation.  Lane was from Jericho, Vermont, a town high in the Green Mountains and he marketed his land there, bringing settlers up from the United States. Jericho was not a farming area, and while these mountain people were rugged, they were not here for the rich fields that hid under the canopy of the old forests.  They were here for the trees, and they cut and burned the forest for a dozen years.  Their primary revenue came from potash made from hardwood. To make potash, they burned maple and beech trees and leached water through the dry ash. This resulted in a liquor that was evaporated in an iron pot until it crystallized. The crystals were composed of potassium hydroxide, or lye, which was shipped off down the river and sold to the highest bidder, and ultimately used in bleaching cloth.  To produce enough lye to be marketable, a lot of trees had to be burned.  The appetite for hard currency was the driving force that cleared the fields, and, while they grew some corn and potatoes for their own consumption, these early settlers did not have the skills to establish sustainable farms.  Their techniques earned them money, but food was soon in such short supply that pork quadrupled in price over the ten-year period ending in 1811.  In theory, settlers were supposed to create homesteads, groups of farms that would evolve into communities, but many of these early settlers were focussed solely on the cash that could be obtained from the ashes of the once majestic forests.  They had no long-term plans and little understanding of Lower Canada. In 1807 Captain James Murray, the owner of the seignieury of Argenteuil, was forced to sue the American residents of Lane's Purchase for his seigniorial dues, and in 1810, the remnants of the community collapsed under the weight of a famine.

When Thomas Barron arrived in Lachute in 1809, a lot of Americans were eager to sell their woodcuts. By the time the War of 1812 began, those who saw themselves as Americans were glad to take what they could get, and leave.  Those who stayed behind, who had successfully adapted to this new environment, would form the core of what became Lachute.

Barron, arriving in this period of rapid decline, saw only opportunity.  When he first arrived in North America, he stayed with his uncle in Hawksbury, and the earliest reports show him marrying Eliza Hastings, the sister of a successful Lachute resident, so it is safe to imagine that he could count on some local connections and backing. He encouraged others to come from Scotland and apply their Scottish agricultural techniques to the fields of stumps that the Americans had abandoned.  There was a glut of such properties to be had, and so the prices were reasonable.  The Scottish Lowlanders had developed modern farming techniques and strategies, inspired in part by Lord Kames who for years had cajoled Scottish landlords to encourage experimentation and innovation in their farming practices.  As a result, these farmers were well suited to the task of converting the fertile lands around Lachute into prosperous farms.

Although Barron did not 'found' Lachute, his family, originally from Morayshire in the Scottish lowlands, was very influential in Lachute's early development. G.R.Rigby, in his book "A History of Lachute" wrote that "..if Jedediah Lane was the founder of Lachute, Lieutenant Colonel Thomas Barron was its first squire."  A testimony to his influence is seen in the fact that the land that Barron acquired eventually became the centre of the town of Lachute.  Among other undertakings, he joined the Militia during the War of 1812 and proved himself as a soldier, rising from Major to Lieutenant Colonel. After the war his influence increased and he became Justice of the Peace and eventually Crown Land Agent for the surrounding regions of Chatham, Wentworth, Gore, Morin and Howard.

Among those who followed Thomas Barron from Scotland was his brother John. Thomas and Eliza were childless, but his brother had two sons, the first one, also named Thomas, born upon the family's arrival in Lachute.  This namesake of the Colonel followed in the footsteps of his uncle, holding important positions in Lachute society and eventually rising to the post of Mayor.  He had 12 children and thus the clan of the and Barrons of Lachute was established. In 1864, upon the death of Colonel Thomas Barron, the Scottish and Irish settlers of the region of Gore named Baron Lake in his honour and many of the streets in the core of Lachute were named in the memory of his nephew and descendants.  Thomas, Robert, Mary, Barron, Henry and Sydney streets were all named in this manner and serve as a reminder of this important family.